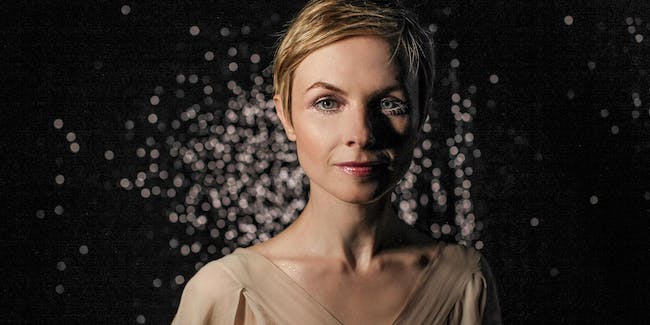 With a sweetly mellifluous soprano echoing Blossom Dearie’s lighter-than-air approach as well as her gift for evocative songwriting, Kat Edmonson is a rare artist who embodies the spirit of the past while remaining resolutely au courant. Her unusually charming and seamless blend of old and new has garnered attention on “NPR Tiny Desk Concerts”, “Austin City Limits”, and “A Prairie Home Companion”. The vintage pop and jazz vocalist’s new album Dreamers Do is out February 7, 2020 with a forty-city, U.S. tour to follow. The album blends original compositions and reimagined mid 20th century classic Disney songs, and tells a story which takes place over the course of one sleepless night. Dreamers Do follows the release of 2018’s Old Fashioned Gal, which Billboard calls “an intimate journey from doubt to resolve and implied triumph.” NPR Music raves the album is “a handsome showcase for her songwriting, which has grown ever more confident over the last decade,” while the Associated Press says the record “sounds like an alternate soundtrack to an Audrey Hepburn film.” Edmonson’s critically acclaimed 2014 release The Big Picture, which debuted #1 on the Billboard Heatseekers, #1 on Contemporary Jazz Chart and #2 on the Total Jazz Chart. NPR First Listen described the record, “She’s a savvy student of ‘60s film soundtracks, jazz-pop stylists and Brill Building songcraft.” Her 2015 performance on “CBS This Morning: Saturday” garnered the program’s highest rated viewership since 2006. She recently appeared in Woody Allen’s Cafe Society as a 1930s jazz singer and is highlighted on the official soundtrack performing her version of “Mountain Greenery.” 2012’s Way Down Low was described by The New York Times as “fresh as a spring bouquet” while The Boston Globe’s Steve Greenlee heralded it as “one of the greatest vocal albums I’ve ever heard.” The record debuted at #1 on the Billboard Heatseekers Albums Chart and was featured on several major year-end lists including Downbeat Magazine, WNYC Soundcheck’s “Best Live Performances” and Daytrotter’s “Best Sessions of 2012.” Edmonson was featured on NPR an impressive five times that same year. The Texas native began crafting her signature sound while performing in Austin’s local club circuit for years before releasing her debut LP Take To The Sky in 2009. She went on to tour worldwide with high profile acts including Lyle Lovett, Chris Isaak, Gary Clark Jr., Shawn Colvin, Willie Nelson, Smokey Robinson, Nick Lowe and more.