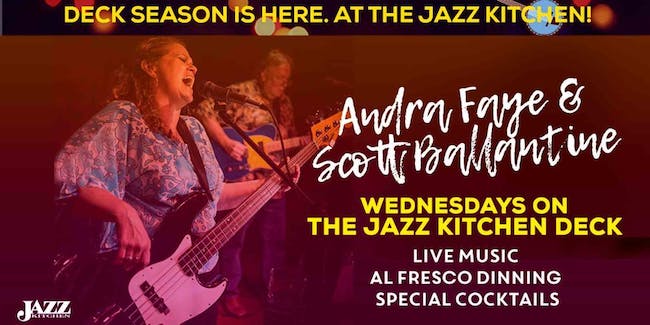 iCal
Google
HEATING UP SUMMER EVERY WEDNESDAY NIGHT ON THE DECK

Andra Faye and Scott Ballantine are native Hoosiers, and honed their musical sensibilities in the capitol city of Indianapolis. Scott is well known for having had the best vintage guitar shops in town for many years, and also for founding the much loved band, The Strugglers, in the 70s, who were the house band at the Hummingbird Cafe, and still have reunions to this day. He is a fabulous teacher & is a wonderful jazz, country, blues & roots guitarist, who is equally at home on acoustic and electric guitar. Known as a "guitar players' guitar player", he is adept playing solo shows or leading bands.

Andra Faye is known for her strong vocals and her abilities as a multi-instrumentalist, playing bass, mandolin, fiddle & guitar. She has been featured on the cover of Mandolin Magazine and was called "First Lady of The Blues Mandolin", and has been twice been nominated for Blues Music Awards as an instrumentalist. Her love for the blues took her on a journey away from Indiana when she joined a band called Saffire-The Uppity Blues Women; touring the world, and recording for Alligator Records. She toured for 17 years with Saffire until the band’s retirement in 2009. Returning home in 2011 she formed a rootsy band called Andra Faye & The Rays, and began playing as a duo with Scott in 2012, to be able to play all the types music they both enjoy.

They released their first independent CD project in 2013, "Laying Down Our Blues", to great acclaim, and their second recording, “Coulda Woulda Shoulda”, was released summer of 2015 by the VizzTone Label Group and is receiving wonderful reviews for their instrumental & vocal talents, as well as their songwriting. “CWS” is nominated for a 2016 Blues Blast Award for Best Acoustic Blues CD. Scott and Andra were voted #1 Blues Act for 2015 by NUVO Magazine’s Best of Indy Readers Choice Awards, and are again nominated for 2016. They frequently perform & teach in Indianapolis, and also tour regionally & nationally, and are in demand as teachers in music workshops across the country.