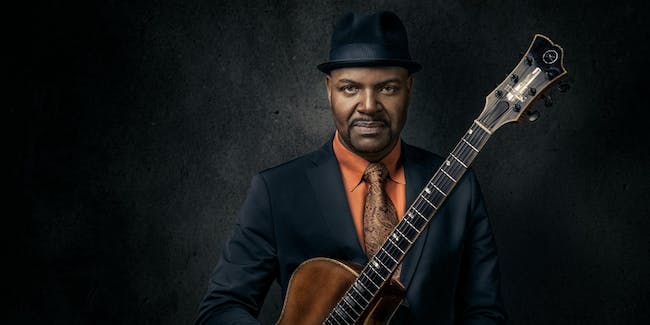 iCal
Google
Back with his trio to Indy! Guitarist for likes of Stanley Turrentine, Charles Earland, Miles Davis, Kenny Garrett, and Dr. John.

Born in Harlem and raised on the Upper West Side of NYC, Bobby Broom took up the guitar at 12 and five years later, in 1977, made his first appearance with Sonny Rollins at Carnegie Hall. He went on to tour and record with Rollins in 1981- 86 (and again, more recently from 2005 – 2010). During his early years, Bobby also performed with trumpeters: Tom Browne and Hugh Masekela, pianists: Weldon Irvine and Dave Grusin and Charlie Parker pianists: Al Haig and Walter Bishop, Jr. Additionally, Broom was asked to join Art Blakey and the Jazz Messengers after completing a two-week engagement in NY with the band. However, he chose another direction instead which ultimately led to his association with GRP Records.

By 1981, Broom had recorded his debut as a leader, Clean Sweep for GRP. He relocated to Chicago later in that decade, while continuing to work with Kenny Burrell, Stanley Turrentine, Charles Earland, Miles Davis, Kenny Garrett, and Dr. John, among others over the next 20 years.

Throughout his career, Bobby has also been active as a jazz educator. He holds a Master of Music degree in Jazz Pedagogy from Northwestern University. His first teaching experience was under the direction of Jackie Mclean at the University of Hartford’s, Hartt School of Music. Prior to his current position at North Park University, Broom was a jazz faculty member at DePaul University for six years, Roosevelt University and the American Conservatory of Music. He conducts clinics, master classes and lectures nationwide and abroad and is a teaching artist/instructor with the Thelonious Monk Institute and the Ravinia Jazz Mentor Program.

Heralded as “one of the most musical guitarists of our times,” by author and jazz critic Ted Gioia, Bobby has spent the new millennium focusing on his musical output as a leader. He has recorded with both his Bobby Broom Trio and the disbanded, Deep Blue Organ Trio for the Origin label (his Plays for Monk was released in spring 2009, The Way I Play in April 2008, and Deep Blue’s Wonderfu1! in 2011 and Folk Music in 2007). He was recognized as one of the top guitarists in Down Beat magazine’s annual Readers Poll in 2015 and their Critics Poll for 3 years, from 2012–2014 and again in 2017. His latest BBT release, My Shining Hour (Origin, 2014), received a New York Times review and placed at number three on the US national jazz radio chart.

Broom’s latest recording is with his new organ group, the Bobby Broom Organi-Sation, which was the opening act for Steely Dan’s fifty city, North American tour of 2014. The new recording, “Soul Fingers,” is Broom’s most ambitious to date. Produced by Steve Jordan, Broom once again revisits the music of his youth, employing palpable group interplay, a wide range of instrumental palates and his own singularly personal sound and style.