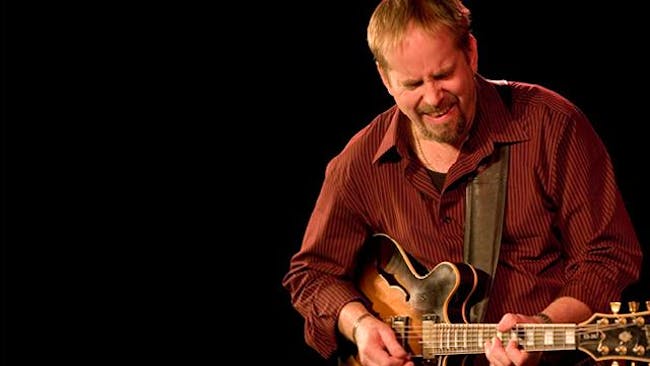 Whether you’ve heard guitarist Dave Stryker leading his own group (with 30 CD’s as a leader to date), or as a featured sideman with Stanley Turrentine, Jack McDuff, and many others, you know why the Village Voice calls him “one of the most distinctive guitarists to come along in recent years.” He was recently voted once again into the 2019 Downbeat Readers and Critics Polls for the 10th time.

"…one of the most joyous feels around. –Pat Metheny "

Eight Track III hit #1 for 6 weeks and #3 most played for the year on the JazzWeek Radio chart. It received great reviews including 4 Stars in Downbeat and several best of the year including New York Times and Rolling Stone. His previous CD “Strykin’ Ahead” stayed on the JazzWeek radio chart for 25 weeks, reaching #3 and was picked as one of the Top CD’s of 2017 in Downbeat and many other lists. His previous CD “Eight Track II” went to #2 on the JazzWeek Radio chart staying on the chart for 20 weeks and received 4 Stars in Downbeat. “Messin’ with Mister T” is a celebration of the man he worked with for over a decade — Stanley Turrentine, “Mister T” — with ten of the greatest tenor sax players on the scene today. It went to #1 on JazzWeek Radio and stayed in the Top 50 for 20 weeks and received great reviews including 4 1/2 stars in Downbeat magazine. *JUST IN: Dave Stryker’s Jazz Guitar Improvisation Method Vol. 3 book is now available here.

"…one of the most distinctive guitarists to come along in recent years. –Village Voice"