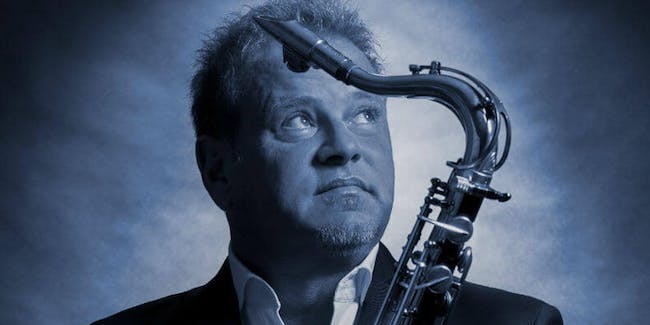 From “Fear and creativity can not live in the same room,” declares free-spirited and consummate chart-topping saxophonist, composer, producer and radio host Euge Groove. “You can’t bring fear into the creative process. It took me a while to get that.” Euge Groove’s Ying and Yang and ebb and flow approach to his artistry and life have allowed him to enjoy a career longevity that is atypical. The highly sought after musical chameleon has been called upon for his musical prowess by everyone from Rock `N' Roll Hall of Famer Tina Turner and balladeer Luther Vandross to UK Blues Rocker Joe Cocker, Richard Marx, Tower of Power and Huey Lewis and the News, among countless others. A road warrior, Euge Groove stays at the top of his game by maintaining a busy touring schedule. “I love live performance, which is probably pretty obvious to anyone that has seen me live,” shares the charismatic saxman. “On a sonic level, I try to capture the space of a live performance when I record. Instead of going for a really ‘dry’ soundstage, I try to envision what the sound would be if it was playing on a theater or small venue stage.” August 19, 2014 Shanachie Entertainment will release GOT 2 BE GROOVIN’, created over a six month period and the latest installment in Euge Groove’s musical evolution. “It was a blessing to take some time off from touring and really be able to focus on the creating this project,” states Euge. “I’ve built a great studio here at the ‘Groove House’ and it makes me feel good just to sit in it. I’ll light a bunch of candles, incense, warm lighting, and just open the mind to music. It’s an amazing feeling.”

In an industry where artists are consistently put in a box and categorized, Euge Groove remains an artist who chooses to continually push the boundaries and let his music go where his heart leads. “Good music is good music, no matter what.” Euge’s open heart and ears have led him to the top of the charts multiple times resulting in thirteen #1 hits.GOT 2 BE GROOVIN’ is sure to find a home at the top once again.

GOT 2 BE GROOVIN’ is an exhilarating set of nine originals and one cover that opens with Euge’s soaring soprano saxophone on the alluring “Forever And A Day,” giving a nod to Shakespeare in typical Euge tradition. The album’s title track and first single embodies all the right ingredients for a Euge Groove smash hit, as he struts his stuff and pulls out all the stops concocting a timeless organic groove of jazz, R&B, funk and soul. “This song came out one morning after I had gone to bed diggin’ on James Brown,” explains Euge. “He always had groove that turned the snare beat around and I wanted to capture that but in a modern studio kind of way.” Euge nails the track with its freight train guitar, rolling Hammond B 3 and funk horn section that would have done the ‘Godfather of Soul’ proud. In addition to paying homage to musical influences on GOT 2 BE GROOVIN’, Euge gives us insight into some of the people closest to him. A family man, many of the album tracks are inspired by his family, including the irresistibly spunky and sparkling R&B number “Miss Bane,” which highlights Euge’s ethereal soprano and was penned in honor of his wife. Euge also dedicated the album’s one cover, the Doug Edwards and David Richardson song “Wild Flower,” to his wife stating that “every lyric in the song seems like it was written just for her.” Through the years “Wild Flower” has been recorded by everyone from The O’Jays and The Neville Brothers to Johnny Mathis and Blake Shelton. Euge’s rendition features Elliot Yamin of American Idol fame who delivers a warm and moving version.

The sweet and mellifluous ditty “Hey Hey Lil’ Lilah Belle” captures the jubilant and beautiful energy of Euge’s daughter while “Homie Grown” finds him in good company collaborating with some like-minded creative spirits including guitarist Paul Brown, keyboardist and guitarist Jeff Carruthers, and bassist Roberto Vally. A special highlight onGOT 2 BE GROOVIN’ is the introspective and gorgeous gospel-inflected “Rain Down On Me,” featuring Peter White’s impressionistic guitar in a delicate dance with Euge’s robust tenor. “I associate this song with God and it is about asking for a cleansing of the soul. It is something I beg for from time to time,” confides the multi-instrumentalist.

“Groovin Up Hip Street” calls to mind magical vibes of The Blackbyrd’s with its magical groove. Euge shares, “I had an idea to write a song that if it was playing while you were swaggering with confidence on the ‘hip street’ wherever you are and it was playing behind you, this is what it would sound like. It’s four-on-the-floor kick drum is your foot-step and your finger snaps and hand claps push the groove. There is no snare drum on this cut, which is a first for me. Just snaps and claps.” Who wouldn’t want theme a like this?!

Euge Groove pays homage to his West Coast roots with “Tango in Tio.” T.O., being a nickname given to his Thousand Oaks neighborhood. GOT 2 BE GROOVIN’ closes with “In Love with You” featuring vocalist Chanel Haynes from Trin-i-Tee 5:7. Euge explains how he connected with the singer. “My wife happened to be at her sister’s house in Austin for a party and was helping to clean up when she heard someone singing in the next room. She was freaking out over her voice. It turned out to be Chanel. Her voice is ridiculous. At times it’s like listening to Toni Braxton, then she goes all Tina Turner on you!”

Born Steven Eugene Grove in Hagerstown, Maryland, Euge Groove grew up in a musical home. His mother played piano and taught the Cherub choir at Christ Lutheran Church and he began his own musical pursuits at the age of seven, beginning with the piano and adding the saxophone at nine. But for Euge it was in elementary school where he discovered that music was his calling. “In fifth grade I thought I'd be in school band the rest of my life.” He later discovered two saxophonists who had a profound effect on his approach to playing. “One was French classical player Marcel Mule, who really defined what the sax was supposed to sound like for me and the other was David Sanborn. He took that sound and brought it into the mainstream world,” reminisces the worldly saxophonist. Through the years, Euge’s love of Jazz, R&B, Gospel and Blues have all come together to inform his personalized sound. He explains, “I've listened to everyone from Grover (Washington Jr.) and (David) Sanborn to (Charlie) Parker and (John) Coltrane as well as (Michael) Brecker, (Stan) Getz, King Curtis, Junior Walker, Richard Elliott and Kirk Whalum. The thing is, the more mature we become the more those influences fuse into something new. I always listened to a lot of R&B growing up, fused that with Pop music, then with the Gospel music. Hopefully all of these influences come through in my music and I am able to create my own unique expression.”

A graduate of the University of Miami's School of Music, Euge launched his professional career in Miami in the mid 80s, playing in Salsa bands, top 40 club bands and doing the occasional high profile session date like Expose's “Seasons Change,” a #1 Billboard AC hit. Not long after he moved to L.A. in 1987, he wrote a track for Richard Elliot's THE POWER OF SUGGESTION album, and Elliot recommended Euge to take over his spot in Tower of Power. Euge toured with TOP for four years, including a year backing Huey Lewis & The News. His resume grew from there to include recording, touring or performing stints with Joe Cocker, The Eurythmics, The Gap Band, Elton John, Bonnie Raitt, Aaron Neville and Richard Marx. Marx included Euge's horn on “Keep Coming Back,” a #1 AC hit duet he recorded with Luther Vandross. In 1999, coming off the road after two years of touring with popular Italian singer Eros Ramazotti and Joe Cocker, the saxophonist paved the way for his eventual solo stardom by recording some tracks of his own. Without a record label to distribute the music, Euge put his songs on the now-defunct MP3.com website, dubbing himself “Euge Groove” and downloading started almost immediately and Euge was soon topping the MP3.com Jazz chart.

He signed soon thereafter with Warner Bros. “Vinyl,” his first single from his self-titled Warner Bros. debut, set a record by spending 27 weeks on the R&R charts, eventually ranking at #24 for the year. PLAY DATE kept the trend going with two more #1 radio hits, “Slam Dunk” and “Rewind.” In 2004, Euge Groove's Narada debut, LIVIN' LARGE, spent 68 weeks on the Billboard charts, debuted at #4 and came in at #25 overall for 2004. "Livin' Large," the single, was the #5 most played song for 2004 on the R&R singles chart. "XXL" spent 36 weeks on the radio chart. JUST FEELS RIGHT followed in 2005 and its first single, "Get Em Goin'," was #1 for two months.

BORN TO GROOVE followed in 2007 and featured several chart-topping singles, including “song of the year” for Relgify. His Shanachie debut was in 2009 and included the #1 smash hit title track and the top five single “All For You.” 2011 saw the release of S7VEN LARGE whose title track scored a #1 hit. 2012 brought the release of HOUSE OF GROOVE, which spawned two #1 hits.

When Euge Groove is not in the studio or on the road he finds comfort in being with his family, cooking, swimming, running, playing with animals and gardening. The saxman who makes his home his sanctuary confides, “It is my prayer that when people hear this new music that they will listen and be relaxed through this new journey.”