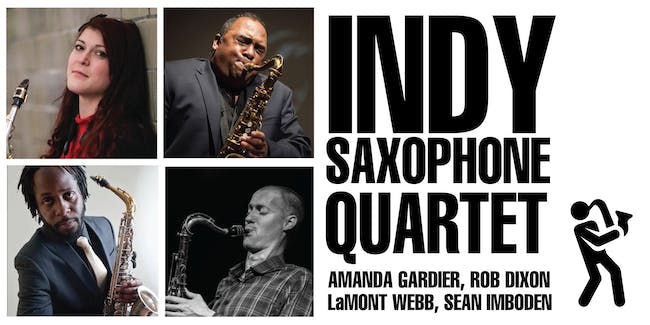 Comprised of four of Indianapolis' premier saxophonists, the Indy Saxophone Quartet explores an eclectic, spirited, and soulful assortment of pop/rock covers, jazz standards, and original compositions. With influences stemming from the World Saxophone Quartet and Supersax, the ensemble performs the music of Stevie Wonder, Bob Dylan, Bjork, The Beatles, Crowded House, The Beach Boys, Interpol, Billy Strayhorn, and others.

Rob Dixon has gained significant recognition throughout Indianapolis (often referred to as the Musical Mayor of Indianapolis) and the greater international jazz scene through his performances with the Count Basie Band, Tony Bennett, Slide Hampton, The Smithsonian Jazz Masterworks, Mike Clark, the Headhunters, Charlie Hunter, and his own groups Triology and the Indianapolis Jazz Collective.

LaMont Webb has become a staple in the Indianapolis jazz scene, performing regularly with the Ryan Taylor Quartet, the Sean Imboden Large Ensemble, and the Cassius Goens III Quartet.

Sean Imboden began his professional career performing for Broadway productions including Hairspray, A Chorus Line, and Young Frankenstein. Since then, he has also performed on Late Night with Jimmy Fallon and with the Radio City Music Hall Orchestra, the Indianapolis Symphony Orchestra, Aretha Franklin, The Temptations, the Tucker Brothers Group, and his own band the Sean Imboden Large Ensemble.

Head arranger/composer Amanda Gardier has performed at venues across the U.S. with the Charlie Ballantine Group, Dave Stryker, Ingrid Jensen, Leni Stern, Wayne Wallace, Wes "Warmdaddy" Anderson, and her own quartet. In 2018, Gardier released her debut album, Empathy, which earned 3.5 stars in Downbeat magazine and was described as an album with "a lot of something for everyone" (All About Jazz). For their debut performance at the Jazz Kitchen, the Indy Saxophone Quartet will be joined by Jesse Wittman on bass and Carrington Clinton on drums.