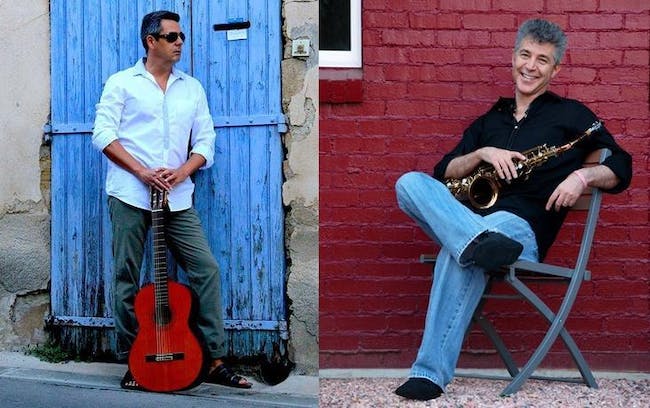 Since emerging as a force in contemporary jazz in the mid-90s with a trademark sound captured in the title of his debut album Classical Soul, Marc Antoine has shared his joyous musical wanderlust on a discography infused with extraordinary exotic journeys. After living and recording in Madrid – his wife Rebecca’s hometown – for 12 years, the multi-talented Parisian born acoustic guitarist relocated back to Southern California in 2015. While keeping his deep melodic flow and exotic textures front and center, he shares the lighthearted spirit of his exciting new life on his highly anticipated Woodward Avenue Records debut, an homage to his new hometown of Laguna Beach.

Jazziz magazine writes that Nelson Rangell is “an artist of depth, a master of song, and an improviser non pareil.” The Times of London notes “his extraordinary facility on a range of instruments” and Rangell’s “considerable crowd pleasing power”. Saxophone Journal writes “He commands the alto saxophone with such authority there can be no denying that Rangell is a true artist,” and Flute Talk Magazine states “Nelson Rangell creates the impression that anything is possible when he improvises.” Such praise is a confirmation of what contemporary jazz fans have known since the Denver based saxophonist emerged in the late 80s: that Rangell is one of the most exciting and diverse performers in the genre, equally adept at soprano, alto, and tenor saxophone, as well as being a genuine virtuoso on flute and piccolo.