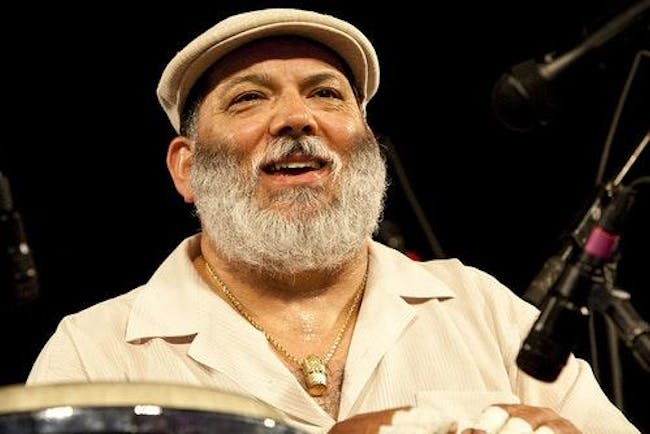 Join master conguero Poncho Sanchez and his hard driving Latin Jazz band as they returns to The Jazz Kitchen. We're super excited for a mix of Poncho's signature style of infectious rhythms and swinging jazz pyrotechnics plus a preview of his forthcoming album in tribute to the music of John Coltrane.

Poncho Sanchez was born in Texas on October 30, 1951 into a large Mexican-American family (rumor has it that his 13-year old mother fled to the U.S. after hiding under the bed as revolutionary Pancho Villa stormed her village), but grew up in the Los Angeles area, where he was weaned on a broad range of Latin and non-Latin popular music. Inspired by the conga playing of Cuban great Mongo Santamaria, he honed his skills as a percussionist and broke into the limelight at the age of 23 when he joined vibraphonist Cal Tjader’s famed Latin jazz ensemble in 1975. Poncho performed with him until Tjader’s untimely death in 1982. A year later, he began his unprecedented 23-year relationship with Concord Records, which has produced two dozen recordings, a Grammy Award and several Grammy nominations.